Esther McVey on the Way Out?

Posted on July 5, 2018 by snaithmagmailcom 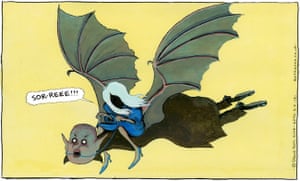 Esther Tries to Ride out the Storm.

Our Newshawks spotted this one:

Esther McVey has to go. Her downright lies are dangerous

In a world of fake news and downright mendacity, lying to parliament may seem like just another day in politics. But the work and pensions secretary Esther McVey’s non-apology in the Commons on Wednesday, deliberately repeating fabrications about the universal credit (UC) disaster, takes indifference to facts to a new level of insolence.

The comptroller and auditor general, Sir Amyas Morse, who is in charge of the rigorously independent National Audit Office, has a reputation for strict propriety and extreme circumspection in his public comments. It takes unprecedented misrepresentation of an NAO report to force him to take the extraordinary step of publishing his letter of reprimand to the minister in charge of the Department for Work and Pensions. What else can he do when…